I know, it’s a bit taboo to disclose what you made/lost. I wrestled with this idea of publishing my income and expenses online for awhile now. But, after much thought, why the heck not?! Here we are a year later….

Now, let’s start from the top. Fall 15,’ I suffered from a work-related incident that left me unable to perform my full-time duties. While out of work, I actively pursued other forms of employment. I interviewed a bunch and was finally hired in November 15.’ Excited and looking forward to the new position in the new year, I was content. I stopped actively looking for a new job. January 16′ came around, and I was to start my new position at the end of the month. Yay! Right? Wrong! Less than one week before my start date. I got a call from my future (EX) boss to be, that the higher ups decided to go in a different direction.

Just like that, my future income was taking away from me. On the night before she called, the craziest thing happened. I had a dream, (some would call it a premonition) that the position was taken away from me.  So, when she called I wasn’t too fazed (I strongly believe in my dreams). The Hubby and I talked about the loss for maybe 2.5 seconds, and we carried on. It was at that moment when she called that I decided to never give someone that much control/power over my financial life. I began doing some research (kinda of) on how to make that happen.

If you are interested in starting a blog of your own, I created a tutorial that will help you start a blog of your own for cheap, starting at only $3.95 per month (this low price is only through my link) for blog hosting. In addition to the low pricing, you will receive a free website domain (a $15 value) through my Bluehost link if you purchase, at least, 12 months of blog hosting.

At this point, I had been home a few months and very much enjoyed it. I did not want to go back to a traditional employer and have my life toyed with. We started discussing ways to make income from home. I Googled that, and plenty of articles popped up. One took me to Pinterest, and it was Michelle’s from Making Sense of Cents income reports, I was marveled by the sheer amount she was making while traveling full-time. I was inspired. That’s when I googled “How to Start a Blog,” and started a blog February 10th, 2016! I knew nothing about hosting, WordPress, or themes. Driven by excitement, and the support of my Husband. Budget with Belle was born.

I started a blog-now what? That was it. I purchased my domain through Bluehost and did nothing else until mid-April. My inspiration was fizzled away by HTML, CSS confusion and this blogger saying this, while another says that. Can you say information overload? I was overstimulated, and weighed down by “how to’s.” There was so much to do, and I found myself doing nothing. Paralyzed by fear and the sheer volume of my new blog to-do-list, I semi-quit. It wasn’t until I found Abby’s Building a Framework e-book that gave me a breath of fresh air. I was recharged and able to learn the ropes of my new found love again (somewhat, ha).

Feeling behind on things, I began to work. I signed up and set-up advertisements with Shareasale, Google Adsense, FlexOffers, and Offerjuice. I wanted to monetize my blog from day one. Income was a serious goal of mine (remember earlier?). I worked on setting up Studiopress, Google Analytics for tracking purposes. I was gaining confidence because I was learning all these new things. I fell in love with WordPress themes because of their customizable features. It’s truly amazing what you can learn to make a site do!

The next thing I did was set up my mailing list. I started using MailChimp because it was FREE. I did not understand how to use it, and I do not think I was effective in using it. It was super complicated for a newbie blogger like myself. I should’ve been using ConvertKit because of its easy, user-friendly system. I highly recommend them for serious bloggers. They have a powerful automation system that allows you swift and easy access to your email list. Especially knowing what I know now, I highly recommend anyone starting a blog to start an email list the same day.

You won’t regret it!

While setting up these important aspects, I began writing blog posts. I was very busy, but, I was not productive. I did not use my time efficiently. I was reading a ton of blogs with different advice, and I was beginning to feel overwhelmed all over again. Social Media tips and hacks left me feeling sour.

Until I found Brittany’s Strategies Worth Sharing, a guide she wrote on how she increased traffic to her blog using Facebook. Brittany was able to increase her Facebook fans from 2,000 to 100,000 in just 5 months!  I was thrilled! I felt equipped to tackle Facebook. But, did not start a page until November 16,’ – more on that later.

Budget with Belle was launched unofficially May 1st, 2016 (the first post went up April 22nd). I didn’t throw up the 10 + blog posts  I’ve written up at once. Looking back it now, I should’ve. I drip them out inconsistently. I wrote and posted inconsistently. I was inconsistent, and it showed. My blog barely got page views, my email list barely grew. I was saddened by that realization (mostly my fault) and semi-quit again. Before quitting (again) I added a resource page filled tools and links to help others on their personal financed and online journey. You can download it below.

Here’s the scoop, on my unofficial launch date, I also set up an Instagram page. While I had all the right ideas, roadmaps, and training. I was silently suffering from depression, anxiety, and PTSD – yep ( the work-related incident was serious). Anyone who knows anything about those BIG 3 will tell you they’re no joke. It affected every aspect of my life. There were many times, I did not leave my house for days on end, was unable to perform the normal day-to-day functions, or just felt sick to my stomach. My depression was at it’s highest in 2016. To add insult to injury, my personal relationships were in turmoil. We lost our older brother, and cousin on the same night in September to a fatal accident. Our 97-year old Grandmother to Hurricane Matthew in October. All while pregnant with our first child.

Now, I don’t share this to make excuses or justify my lack of commitment and inconsistency to my blog. But, I share this with you because “life happens,” and it’s happening all around us. There are things that are out of our control, like illness and loss. In the face of obstacles and adversity, certain areas of my life were pushed aside. This blog was one of them. Instead, I focused on rebuilding my relationships, treating my depression and anxiety, and healing from the loss of our family members. All while, nurturing and loving our unborn baby girl. It was a challenge. But like a Phoenix, I have risen out of the ashes, stronger, better, and more resilient. Grateful for the experience and life lessons. 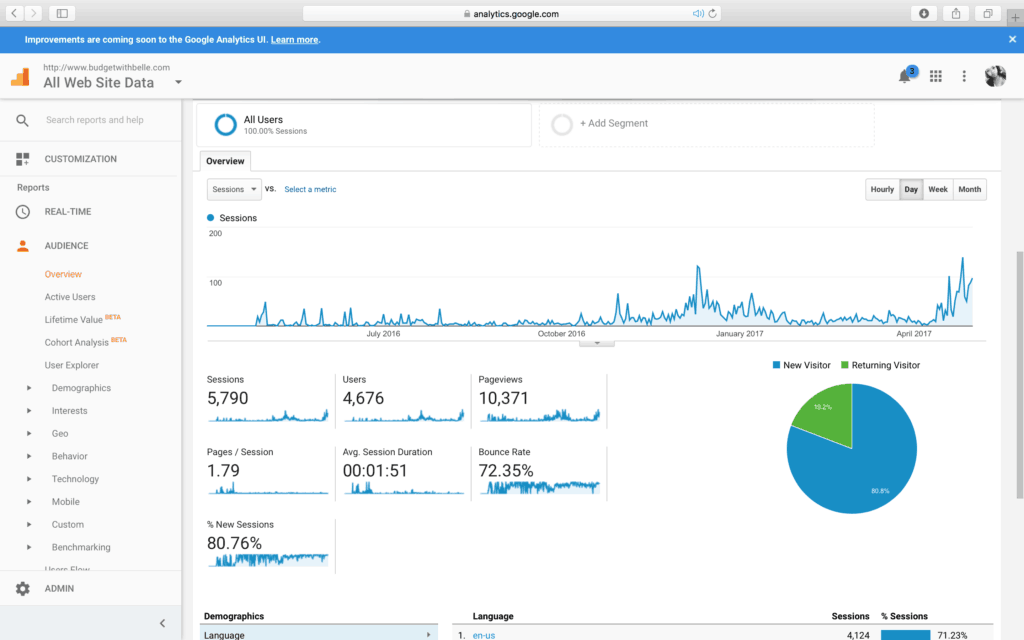 In total, Budget with Belle received a little over 10,000 pageviews FOR AN ENTIRE YEAR!

From April of 2016 to April 2017 I earned $470.20 from my blog. Below is how my income breaks apart in the different blogging income categories:

Popular posts on Budget with Belle:

30 + Ways to Save Money Each Month

How to Make Money Blogging

My plans for my blog.

“All who have accomplished great things have had a great aim, have fixed their gaze on a goal which was high, one which sometimes seemed impossible.” —Orison Swett Marden

It’s important to have a plan and goals. They help you stay motivated and focused. I’m sharing my blog goals publicly in hopes it’ll help keep me accountable and hopefully help others along the way. Below are goals I have for Budget with Belle:

Michelle’s Making Sense of Affiliate Marketing Course, the course went live in July of 2016. I purchased it in December 2016, and it was one of the best investments I’ve made for the blog. This course has helped increase my affiliate income drastically with very low traffic. I can only imagine my results with more traffic!

The course has 6 modules, over 30 lessons, several worksheets, bonuses, an extremely helpful and exclusive Facebook group, and more. Michelle goes through everything that you need to know about affiliate marketing, such as:

The course is perfect for anyone whether they are a new blogger or have been blogging for years, no matter what topic the blog is about, and so on.

In addition: the resources below have helped me immensely. I highly recommend them.

Traffic Transformation: How I Went From 17K to 400K+ Monthly Page Views in 10 Months – Lena’s eBook is amazing for the fact that she dives into the areas of getting traffic from less frequently used platforms like Stumbleupon and Google+.

How was 2016 for you? Are you interested in earning blogging income?

Belle, founder of Budget with Belle, a blog about personal finance and lifestyle. She helps motivate, and inspire others to budget their way into the best versions of themselves. When she's not writing, Belle enjoys afternoon cuddles with her little person, lots of bread, and the sun. Click here to learn how to start your own blog!

May 2017 Income and Traffic Report

Thank you thank you thank you for writing this!! I only started my blog a month or so ago and I feel so behind but I want to monetize it so bad. I’m struggling! I will most definately be saving your blog to come back to!!

You’ve made my day, Nikki. Thank you. Congrats on starting your blog! Be sure to sign up for my free email course it has a wealth of free information that will point you in the right direction. You’ll be making money in no time. https://app.convertkit.com/landing_pages/211183?v=6

Congrats on earning income from your blog and I know you will reach your goal too. I’ve been blogging for years and am just now looking into income so you are way ahead of me.
Linda Luke recently posted…5 Bad Mood Busters that Will Help You Feel Better Fast

Thanks, Linda! I hope so, our baby girl means everything to us. Way to go! I hope these tips helped.

Your story is very inspiring and also very resourceful! 🙂

So happy for you! I wanted to include income reports on my blog but since I’m also new, I was hesitant to share and you have given me the courage to do it. Thank you!

Thank You! You should.

Hi,
Income reports are always attractive and inspirational for readers. I guess when you see that somebody is actually making money from their blog, one is inspired to continue to strive to make it too.
Thanks for the report.

Right! I agree with you. I’ve stopped since they can cause adverse effects on folks too. 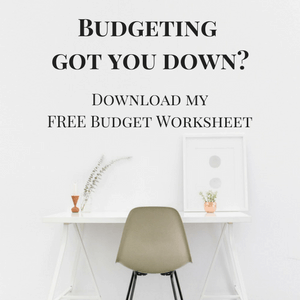